In Mozambique irrigation has historically been considered in terms of large-scale production and infrastructure. Small-scale irrigation has recently become more central to national development plans, and has appeared in policy priorities for the Ministry of Agriculture, and a recent National Irrigation Strategy. 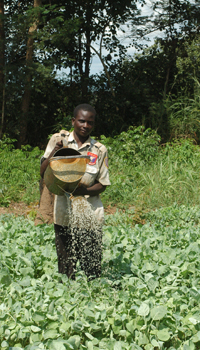 New legislation (Lei de associações de regantes) has been approved by parliament in June 2015 but remains to be implemented by Ministers. He also identified as a key initiative, the World Bank funded PROIRRI programme, which includes both investment to improve small-scale irrigation and monitoring of irrigation efficiency in Mozambique’s central region.

A presentation by the NGO iDE outlined their activities in Mozambique seeking to build supportive commercial frameworks for small-scale agriculture, including for increasing agricultural water use.

The team from ISPM have undertaken fieldwork at Messica, Vanduzi and Nhamatande, with work now underway in Macate and Nampula.

Two sites in Vanduzi have a secure market to produce crops for export for the Vanduzi company nearby. One site relies on long earthen canals to irrigate crops, but these require rebuilding during the rainy season. The other site in Nhombue has benefited from investment as part of the PROIRRI project, which has helped create a piped water supply with sufficient pressure to drive sprinklers for farmers.
In Nhamatande farmers are also producing rice, which is of particular interest to the team as it requires the moving and retention of water.

Case studies in central Mozambique will focus on: