Tanzania has recognised the importance of farmer-led irrigation and actively supports furrow irrigation. Tanzania emphasises irrigation in its agricultural policy and is among the leading countries implementing the CAADP requirements for investment in irrigation. 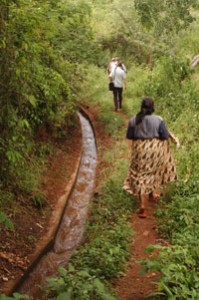 The Inception workshop was held on 14th July 2015 at the Nelson Mandela African Institution of Science and Technology (NM-AIST) in Arusha, Tanzania. Three presentations were made by organisations working in irrigation development in Tanzania.

The Director General of the National Irrigation Commission gave a presentation on Government strategy to aggregate smallholder farmers into registered irrigation organisations.

The NGOs Trias and MVIWATA discussed how they support farmer-led initiatives and improvements to infrastructure.

The presentation by the Pangani Basin Water Board highlighted challenges related to water resource management.

In September 2016 the SAFI Project team took part in a workshop with the National Irrigation Commission in Dar es Salaam to discuss “New Directions for Irrigation in Tanzania”.

The team from NM-AIST in Arusha have been working on case studies in Moshi District, at Mandaka Mnono, Kahe and Mijongweni.
In Kahe there are shallow wells being used for irrigation, and in Mijongweni the focus is on furrow irrigation.
Fieldwork has also been undertaken at Makanya and Mangola in Same District, and in Isenyela. The team has now moved on to sites in Kilombero and Iringa, and will also be focusing on rice production in Rukwa in southern Tanzania in August 2017.